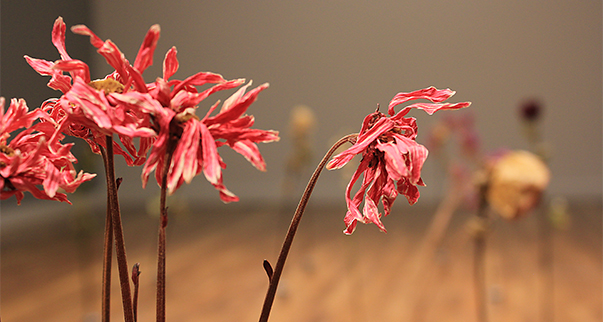 
Adriana Salazar: Perpetuity presents two large-scale, kinetic installations and four single-channel videos. Salazar creates sculptures and installations in which formerly alive creatures are mechanically re-animated: garments, fallen plants, taxidermy animals, objects that are in the verge of becoming debris, have been transformed into new beings that are able to linger in the realm of artificiality. Through the construction of these hybrid objects, Salazar blurs the definitions of a machine, of what is natural, and of what is alive.

Is there an end to our existence? Can we be separated from our bodies and be transformed into something else? Salazar’s work has continued to revolve around these questions in different ways. This is why the realm of mortuary customs appeals to her: it presents numerous ways to approach the ultimate unknown.

In Nothing Else Left, five wooden tables display tidy rows of metal scraps. There are old screws, bent rods and small piles of rusty wires. Salazar retrieved the pieces from a crematorium. The metal bits on the table are medical implants, which were once inside living bodies. They embody the question of the status of our own existence on a physical level: their materiality creates confusion between those objects as parts of a physical body and our own body, thus opening the gap between our certainties and uncertainties, beyond the matter of human death itself.

Adriana Salazar: Perpetuity is presented in collaboration with UC Riverside’s The Immortality Project, a multi-year project to study the science, philosophy, and theology of immortality, exploring questions related to the nature of heaven, civic immortality, and the desirability of living forever.

Salazar will also lecture on her work as part of UC Riverside’s conference Objects of Devotion/Objectos de Devoción: Latin American Material Religious Cultures, December 12-14, 2014. This multidisciplinary conference engages historic and contemporary Latin American and Latino visual, material, and ritual cultural practice, coinciding with an exhibit of the work of Mexican-British artist, Alinka Echeverria, at UCR California Museum of Photography (November 1, 2014–January 24, 2015). Echeverria’s photographs explore the relationship of visual, religious, and material culture in Mexico, considering in particular the power of the Guadalupe icon.

ABOUT THE ARTIST
Adriana Salazar lives and works in Bogota, Colombia. She graduated with honors as a Bachelor in Fine Arts from the Jorge Tadeo Lozano University of Bogota. She later received a Magna cum Laude Post-graduate degree in Philosophy from the Javeriana University of Bogota. She has also been exhibiting her work, which is focused on the question of gestures, the relationship between subjects and objects, and the boundaries between nature and artifice. She has participated in art biennales, collective and solo exhibitions in Europe, Asia, North and South America. She has also participated in several academic and curatorial projects, and has received fellowships from international artistic residencies, such as Akiyoshidai International Art Village, Japan, and Nordik Artists’ Center, Norway. She was a sculpture teacher for the Undergraduate program of Visual Arts, at the Javeriana University of Bogota. In 2006 she founded La Ropería, a fashion design store that features the creations of 30 Colombian fashion designers. She also designs clothes for her own brand.