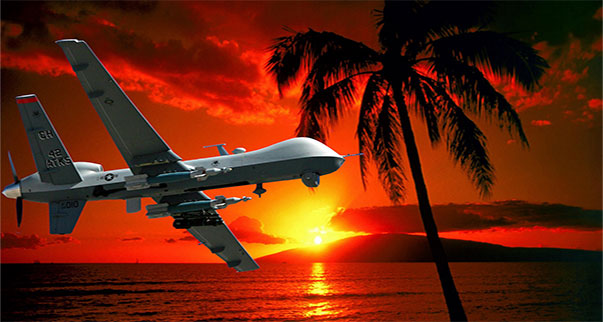 
Elana Mann and Matias Viegener have produced a new work, Drone Poem Duet, for the Culver Center of the Arts Digital Mural Project series. It considers the way drones have infiltrated our lives as toys, weapons, spooky friends, accomplices, listeners, watches, and enemies. Viegener’s drone poem was written in 2013 through a cell phone, an implicit “friendly” drone. The poem alternates between a sense of playfulness and gravity, revealing the haunting and inevitable presence of drones in our lives. Mann’s animation translates a typical day of drone activity: from afternoon, to evening, to stormy morning. The animation shows drones in the “natural habitat,” highlighting their unique flying abilities, unmatched maneuverability, and deadly accuracy.

Elana Mann is an artist based in Los Angeles, who makes visible the unseen power of sound and listening. She creates artwork across a variety of media including video, performance, sculpture, sound, and collage. She has exhibited nationally and internationally including at the Ford Foundation, REDCAT, Otis College of Art and Design, the Hirshhorn Museum, A Gentil Carioca, and Luxun Academy of Fine Arts. Mann received the 2009 California Community Foundation’s Visual Arts Fellowship as well as a 2013 and 2012 Artists’ Resource for Completion (ARC), grants from the Center for Creative Innovation (CCI). Since 2005 she has collaborated with the artist Audrey Chan as the Chan and Mann. www.elanamann.com

Matias Viegener is a writer, artist and critic who lives in Los Angeles and teaches at California Institute of the Arts. His work has been seen at Los Angeles County Museum of Art, Yerba Buena Center of the Arts, Ars Electronica, ARCO Madrid, Whitney Museum of American Art, Los Angeles Contemporary Exhibitions, Machine Project, Museum of Contemporary Art San Diego, and internationally in Mexico, Colombia, Germany, and Austria. His is co-founder of Fallen Fruit (2004-2013), the author of the new book, 2500 Random Things About Me Too, and the editor of the forthcoming I’m Very Into You, the correspondence of Kathy Acker and McKenzie Wark. He received a Creative Capital award in 2013.

The Culver Center of the Arts Digital Mural Project series is curated by adjunct media curator Jeff Cain. He is on the faculty at the USC Roski School of the Art and Design, and director of the Shed Research Institute.

The Culver Center of the Arts Digital Mural Project at UCR ARTSblock presents a series of changing projects on the two screens inside the façade’s glass kiosks that face the pedestrian mall. These projects are an opportunity to extend ARTSblock programming into the public space.