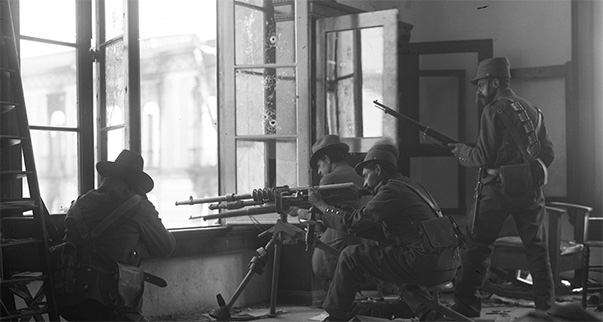 Mexico at the Hour of Combat

Mexico at the Hour of Combat: Sabino Osuna's Photographs of the Mexican Revolution is an exhibition and book based on the Osuna Collection of 427 glass negatives of the Mexican Revolution, which are held in the Special Collections section of University of California, Riverside. The collection mainly covers the period 1910 to 1914. The principal photographer was Sabino Osuna, about whom little is known. Internal evidence suggests that he was a commercial photographer in Mexico City, whose work shifted from portraiture and architectural studies to photo history when the Revolution began. He had excellent access to the protagonists on all sides, and captured many moods of this dramatic revolutionary period. The collection is not just an odd gathering. It displays internal unity, with several concentrations of subject matter. It primarily covers the early years of the Revolution, in and around the capital. There is no doubt that the entire archive is historically important, and half of it, photographically impressive. Additionally, in contrast to the famous Casasola Archive of nearly 500,000 images that cover the Mexican Revolution through the 1940s, the Osuna archive presents one person's viewpoint, rather than that of a hundreds of photographs as with the Casasola Archive. A 118-page book that includes several essays accompanies this exhibition,which is available at the UCR ARTSblock bookstore or from Laguna Wilderness Press. The exhibition will travel after its presentation at California Museum of Photography.

The exhibition opens in the month of November in order to coincide with Riverside\'s annual Dia de los Muertos celebration on November 2, 2012, and the anniversary date of the Mexican Revolution, November 20th, 1910, when Francisco "Pancho" Villa and Pascual Orozco led the first insurrectionist attack.