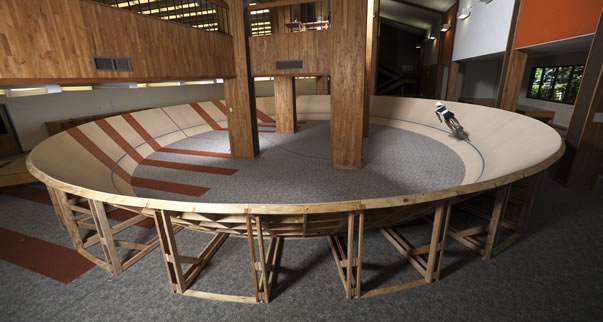 
Exploring the effects of bikes on art and culture, Re:Cycle--Bike Culture in Southern California includes customized bikes, bike designs, and artist projects that use the bicycle and human-powered machines as both metaphors and realizations for restructuring human habitats. In the past few years, bicycle activists, advocates, and aficionados have proven to be vociferous in their desire for reimagining the urban landscape in the U.S. It is a reflection of a shifting value system that looks towards alternate means of transportation, the promotion of healthy lifestyles, and a cultural shift from consumption to sustainability.

The exhibition inaugurates University of California, Riverside's Sweeney Art Gallery's new space in UCR's Barbara and Art Culver Center of the Arts, both of which open to the public with a gala weekend, October 7-9, 2010. Sweeney and Culver are located on a downtown pedestrian wall, located next door to UCR's California Museum of Photography. The exhibition coincides with Riverside's inaugural 2010 Riverside Citrus Classic Bike Run on October 17, 2010. Support for Re:Cycle--Bike Culture in Southern California comes from JensonUSA, UCR's College of Humanities, Arts, and Social Sciences, and The Riverside Marriott. Support for public programming has been provided by the City of Riverside. Organized by UCR Sweeney Art Gallery, and curated by Tyler Stallings, Artistic Director, UCR Culver Center of the Arts & Director, Sweeney Art Gallery.


Supported by the City of Riverside, Riverside Marriott, and JensonUSA