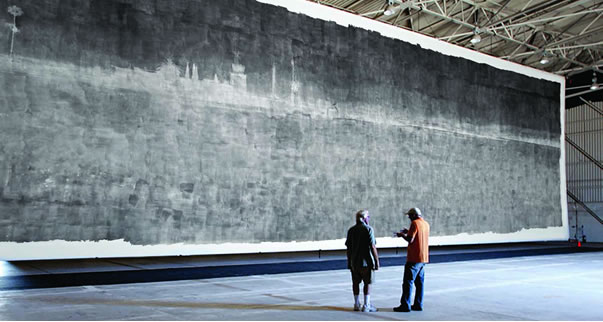 
UCR Sweeney Art Gallery & Culver Center of the Arts present The Great Picture: The World's Largest Photograph & The Legacy Project, an exhibition in three parts that tells the tale of the successful campaign to make the world's largest camera and photograph. The photo's mammoth scale of 32 x 111 feet earned it a place in Guinness World Records, and made it a photo history landmark.

"It is also an exploration of the 172-year-old conflict between painting and photography, and the more recent waning of traditional, analog, darkroom photography in the wake of digital dominance", says Tyler Stallings, artistic director of the Culver Center of the Arts and director of the Sweeney Art Gallery.

The two-story atrium at the Culver Center of the Arts provides a rare opportunity to present such a gargantuan photograph. The Great Picture will be on view from July 16 to Oct. 8, 2011, with a reception on July 16 from 6 to 9 p.m.

Six well-known photographic artists, known as The Legacy Project, aided by 400 artists, experts, and volunteers, transformed an abandoned Southern California F-18 jet hangar at the Marine Corps Air Station El Toro (MCAS El Toro) in Orange County into the largest camera ever made, and then proceeded to make the world's largest photograph, known as 'The Great Picture'. The image is a panoramic view of a portion of the former Marine Corps Air Station, which is destined to become the heart of the Orange County Great Park.

On July 12, 2006, The Legacy Project unveiled the world\'s largest photograph at a reception held inside the world\'s largest camera. It has been exhibited only twice since then during a short viewing at Art Center College of Design, South Campus Wind Tunnel in Pasadena, Calif., in 2007, and this past winter at the Central Academy of Fine Arts in Beijing, China. The Sweeney Art Gallery/Culver Center's presentation of 'The Great Picture' will be accompanied for the first time by additional components that explore the process behind its making and the artists who made it, collectively known as The Legacy Project.

The Great Picture: The World's Largest Photograph & The Legacy Project is organized by UCR Sweeney Art Gallery & Culver Center of the Arts, and has been curated by Tyler Stallings, artistic director for the Culver Center of the Arts and the director of Sweeney Art Gallery. In the past, Stallings has curated other exhibitions that have examined artistic challenges to photographic media that range from Conceptual Photography from the Permanent Collection at Laguna Art Museum in 2005 to Truthiness: Photoraphy as Sculpture at UCR/Califronia Museum of Photography in 2008.

"The Great Picture: The Making of the World's Largest Photograph" is a 196-page book, published and distributed by Hudson Hills Press, that accompanies the exhibition with essays by Stallings, Dawn Hassett, and Lucy R. Lippard, and features photographs documenting this monumental and unprecedented project. Lippard is the author of 21 books on contemporary art and cultural criticism, which include Partial Recall: Photographs of Native North Americans (ed., 1992), The Lure of the Local: Senses of Place in a Multicentered America (1997) and On the Beaten Track: Tourism, Art and Place (1999). Hassett has been a working writer all her life, working in journalism for community-based newspapers and radio programs in Canada. She earned a Master of Professional Writing degree at the University of Southern California where she served on the editorial board of the Southern California Anthology.