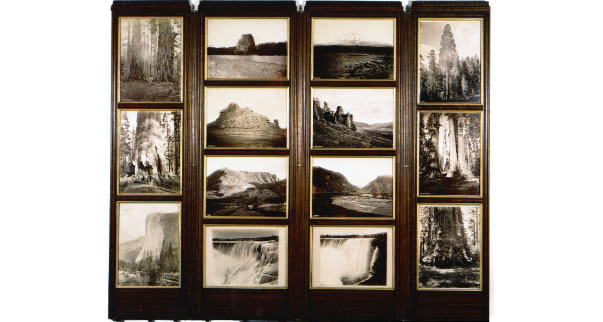 The Screen of Nature

Early Photography of the West


One of the few great examples of the work of nineteenth-century California photographer Carleton Watkins that's not currently on view in the Getty Museum's exhibition of Western landscape photography is a folding screen that's in UCR/California Museum of Photography's collection. This is a decorative screen four panels long on which twenty-six Watkins mammoth-plate prints of Yosemite and related subjects were mounted in the late 1800s.

The primeval forests and mountain majesty of the West was itself a kind of decorative screen on which Americans projected their own dreams, which ranged from the adoration of nature to the exploitation of all natural resources. As a context for Watkins' work, this exhibition offers examples by other hands that show the range of attitudes toward nature that Western photographers had in the late nineteenth century.