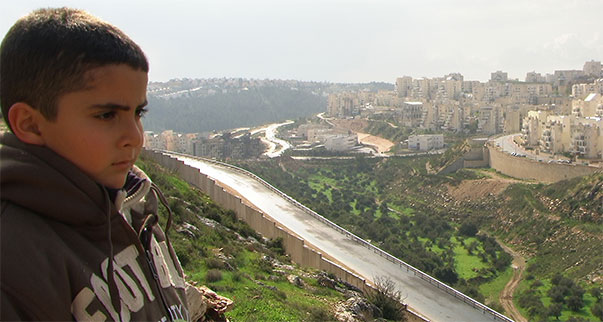 
5 Broken Cameras tells a first-hand account of non-violent resistance in the West Bank village of Bil'lin. The documentary project began in 2005 when Palestinian farmer Emad Burnat began filming the encroaching Israeli settlements, and the accompanying bulldozing of olive groves and ever intensifying protests.

"Filmmaker Emad Burnat chronicles a five-year period in his home town of Bil'in, a Palestinian village in Israeli-occupied West Bank. Burnat had acquired a video camera to trace his son's childhood, but soon he was turning it on friends who were mounting nonviolent demonstrations. Five of Burnat's cameras were destroyed. But each camera captured a distinct chapter, not only in Burnat's life and that of his son's, but also in the protest. The destroyed cameras themselves become largely unseen characters; their pixelated, fragmented, ultimately blank images create an eloquent visual grammar of cyclical violence and loss. Burnat and codirector Davidi insist that filming is a form of healing and survival. Burnat's on his sixth camera now. And it's still working." - Ann Hornaday, Washington Post.