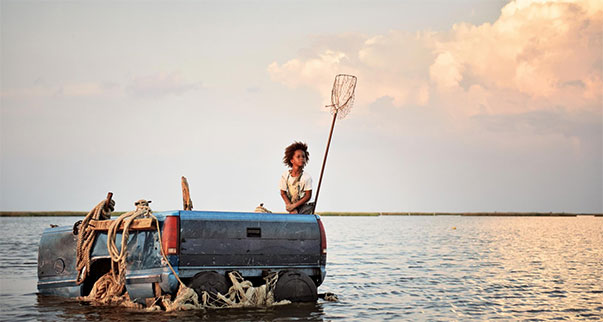 Beasts of the Southern Wild

A young girl, in a forgotten bayou that is cut off from the rest of the country by a sprawling levee, battles an impending natural disaster and her fathers failing health.

Celebrate the New Year at Culver's Third Annual New Year's Eve Party with Screening, Dinner, and Entertainment. Enjoy a pre-screening Dinner at Phood On Main which will put you in the mood with Cajun fare, followed by the screening of the small miracle, Beasts of the Southern Wild, topped off with dancing and entertainment with the fabulous band Milpa. Beasts of the Southern Wild, one of the most talked about and unexpected films of the year is a daring, lyrical, challenging piece of folk art which won the Grand Jury Prize at Sundance and the Golden Camera, Prix Regards, and FIPRESCI Prizes at Cannes. A.O. Scott, The New York Times, commented, "Hushpuppy, the 6-year-old heroine of Beasts of the Southern Wild, has a smile to charm fish out of the water and a scowl so fierce it can stop monsters in their tracks. The movie, a passionate and unruly explosion of Americana, directed by Benh Zeitlin, winks at skepticism, laughs at sober analysis and stares down criticism. Made on a shoestring by a resourceful New Orleans-based collective, it is animated by the same spirit of freedom it sets out to celebrate." See website for details and ticket prices. Reserve early! Last Year's New Year's Eve Party sold out.