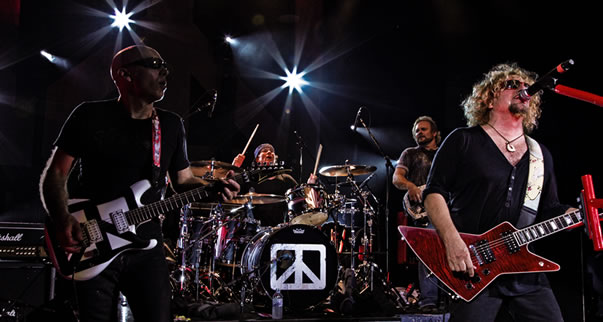 Go There Once, Be There Twice


To Screen at Culver Center April 9 as part of Riverside International Film Festival On Saturday, April 9th, SAMMY HAGAR's new film, Go There Once, Be There Twice, will screen at Culver Center of the Arts at 7:00 pm as part of the Riverside International Film Festival. Tickets are $8.00 and are available at the Culver and the RIFF web sites.

Producers of the film will be present to introduce the screening; a synopsis of which follows: It's not just any club that has a movie made about it for its 20th birthday. That honour belongs to the Cabo Wabo, the brainchild of former VAN HALEN frontman Sammy Hagar. Built when Cabo San Lucas was just a town of 6,000 people, the Cabo Wabo has become an anchor of the now-thriving resort town in no small part due to Hagar's hard work and his annual birthday bash hosted at the Cabo Wabo every year. It's impossible to talk about the club without talking about its creator, really, and Go There Once, Be There Twice is as much Hagar's story as the club's, the film walking through the rocker's life and career with an impressive collection of live performances by and tributes from the scores of famous friends Hagar has hosted in his club's walls. And when all is said and done perhaps it's the iconic NEIL YOUNG who sums the whole endeavour up best, pointing out that "He's got his own club in Mexico, you know. This guy likes to have a good time." Indeed. Following the film director Gil Bettman, Professor at the Dodge College of Film at Chapman and Paul Ware, President at Hi-Def Digital, Inc. will give a talk on "Go There Once, Be There Twice".
Learn more about the Riverside International Film Festival at http://www.riversidefilmfest.org