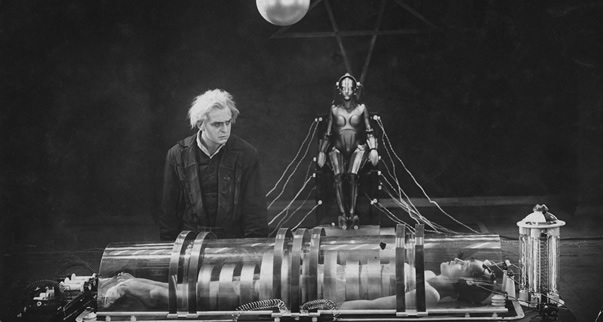 
Fritz Lang's classic silent-film Metropolis presents a futuristic mega-city in which the elite live above the clouds in endless luxury and the working class toil and labor underground. The early sci-fi feature, notable for its innovations in camera technique and special effects, ultimately tells a love story in the wake of class struggle and technological oppression.

"For fans and scholars of the silent-film era, the search for a copy of the original version of Fritz Lang's Metropolis has become a sort of holy grail. One of the most celebrated movies in cinema history, the film had not been viewed at its full length - roughly two and a half hours - since shortly after its premiere in Berlin in 1927. The newly found footage adds 25 minutes. Now for the first time, Lang's vision of a technologically advanced, socially stratified urban dystopia, which has influenced contemporary films like Blade Runner and Star Wars, seems complete and comprehensible." - Larry Rohter,  New York Times
One of the Top 100 Films in Cinematic History Legacy of Cinema Restoration Award, Los Angeles Film Critics, 2010