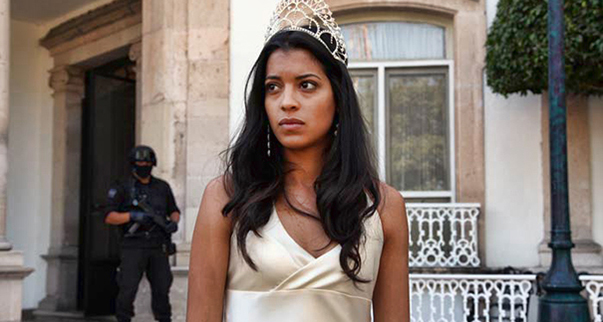 
“Gerardo Naranjo’s superb new feature, Miss Bala, brilliantly draws on the conflicted personality of a young beauty pageant contestant as a tragically stark emblem of Mexico’s all-enveloping drug wars. Stephanie Sigman as a Miss Baja aspirant is caught in a world of murky loyalties and shifting identities. Even the landscapes are imbued with something otherworldly. Making multiple references to Orson Welles’ border town classic Touch of Evil and Jean-Luc Godard’s apocalyptic Weekend, Naranjo finds his own idiom. From the cartel’s nighttime raid on a nightclub to a hotel shootout, he ensnares the viewer in mayhem. Meanwhile, Sigman’s tremulous, vivid performance anchors the movie. It’s a knockout.” Patrick McGavin, Boston Phoenix.