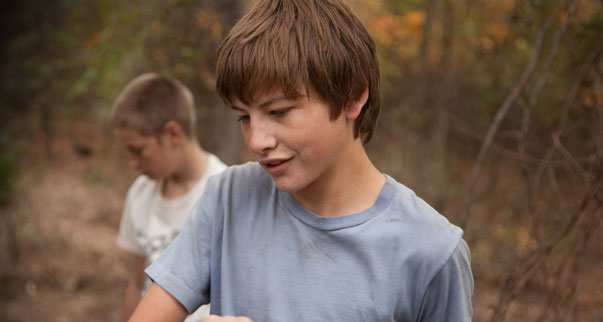 
Two teenage boys encounter a fugitive and form a pact to help him evade the bounty hunters on his trail and to reunite him with his true love.

“A first-rate adventure film about two teen-age Arkansas boys who escape at dawn, hit the river, and discover a fugitive, Mud, living on an island in the Mississippi. Mud has long been in love with a white-trash goddess, Juniper (Reese Witherspoon), and the two cast-adrift boys, stirred by his situation and by their own need to know that love can last, struggle to get them back together. Watching the boys in the wild, plotting and foraging on Mud’s behalf, we can’t help thinking of Huck Finn and Tom Sawyer. The writer and director, Jeff Nichols, brings to the film Twain’s understanding of a boy’s best qualities—a love of adventure, instinctive loyalty, and generous chivalry. Nichols has a strong feeling for the tactility of natural elements—water, wood, terrain, weather.” - David Denby, The New Yorker