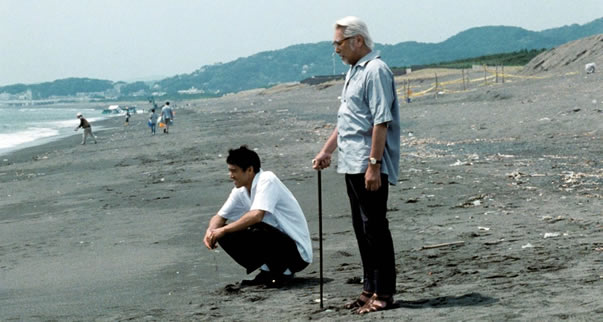 
Writer/director Hirokazu Koreda brings to the screen a family drama that unfolds during the course of a single summer day. The Yokoyama family gathers for a reunion to mark the 15 year anniversary of a family tragedy, the death of their eldest son. They share their remembrances of life together and relive their collective tensions, struggles, and triumphs.

"There is a transcendent serenity in Still Walking, Hirokazu Kore-eda's delicate examination of the emotional dynamics of a middle-class Japanese family. This is exactly the kind of film - quiet, modest, untroubled by ambitions of importance - that risks being lost in the news media shuffle. And yet it is so completely absorbing, so sure of its own scale and scope that while you're watching it the rest of the world fades into irrelevance." - A. O. Scott, New York Times
"Hirokazu Koreda's touching, acutely observed drama about a 24-hour gathering of the Yokoyama clan - together for their annual remembrance of a deceased son - dissects family allegiances and fissures with uncommon grace." - Melissa Anderson, Village Voice
Winner, Best Director, Asian Film Awards, 2009