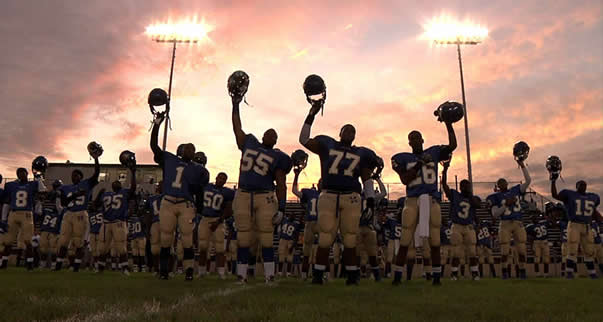 
The winner of the Best Documentary Academy Award, Undefeated is the story of the 2009 Manassas High School football team. Set in inner-city Memphis, the story follows the Manassas Tigers, led by head coach Bill Courtney, as they strive for their first winning season after years of disappointment. "Courtney really does believe all that stuff about adversity and character, and the film is moving for its modest tale of boys learning to act like men." - J. R. Jones Chicago Reader

"There are lines in Undefeated clearly marked on the playing field: five-yards, end zones, out-of-bounds perimeters. And while the other lines depicted in Daniel Lindsay and T.J. Martin's Oscar-winning documentary about a high school football team and its tireless coach aren't etched in chalk on grass and dirt, they're every bit as evident: lines of race, class, money. Shooting for an entire year at a just-about-all-black high school in the graffitied rubble of North Memphis, the fimmakers follow a group of uncertain kids as they come together to turn history around." - Steve Rea, Philadelphia Inquirer.
Riverside Mayor Ronald O. Loveridge, John W. North Football Coach Mark Paredes, and Arlington High School Football Coach Pat McCarthy will discuss the film and its message following the screening on June 2nd.
Winner Academy Award Best Documentary, 2012