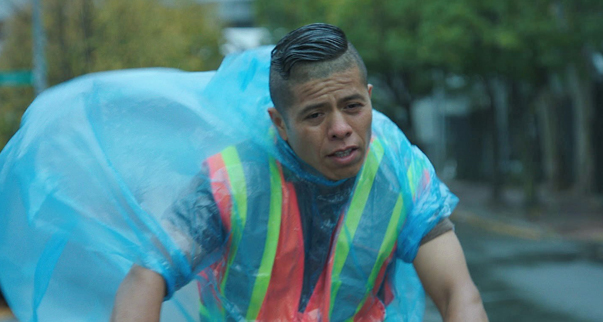 En El Séptimo Día (On The Seventh Day) is a fiction feature from director Jim McKay which follows a group of undocumented immigrants living in Sunset Park, Brooklyn over the course of seven days.

Bicycle delivery guys, construction workers, dishwashers, deli workers, and cotton candy vendors, they work long hours six days a week and then savor their day of rest on Sundays on the soccer fields of Sunset Park. José, a bicycle delivery worker, is the team's captain - young, talented, hardworking and responsible. When José's team makes it to the finals, he and his teammates are thrilled. But his boss throws a wrench into the celebration when he tells José he has to work on Sunday, the day of the finals. José tries to reason with his boss or replace himself, but his efforts fail. If he doesn't work on Sunday, his job and his future will be on the line. But if he doesn't stand up for himself and his teammates, his dignity will be crushed.

Shot in the neighborhoods of Sunset Park, Park Slope, and Gowanus, En El Séptimo Día is a humane, sensitive, and humorous window into a world rarely seen. The film’s impact is made quietly, with restraint and respect for the individual experiences, everyday challenges, and small triumphs of its characters.