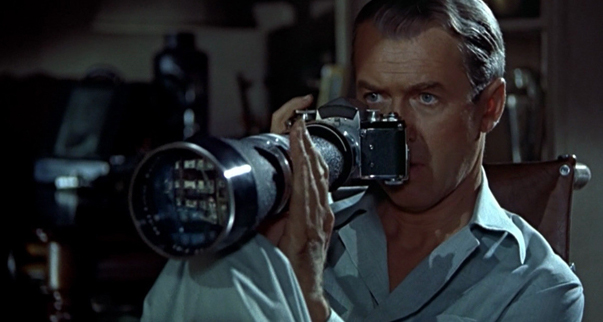 
Laid up with a broken leg, photojournalist L.B. Jeffries (James Stewart) is confined to his tiny, sweltering courtyard apartment. To pass the time between visits from his nurse (Thelma Ritter) and his fashion model girlfriend Lisa (Grace Kelly), the binocular-wielding Jeffries stares through the rear window of his apartment at the goings-on in the other apartments around his courtyard. As he watches his neighbors, he assigns them such roles and character names as "Miss Torso" (Georgine Darcy), a professional dancer with a healthy social life or "Miss Lonelyhearts" (Judith Evelyn), a middle-aged woman who entertains nonexistent gentlemen callers. Of particular interest is seemingly mild-mannered travelling salesman Lars Thorwald (Raymond Burr), who is saddled with a nagging, invalid wife. One afternoon, Thorwald pulls down his window shade, and his wife's incessant bray comes to a sudden halt. Out of boredom, Jeffries casually concocts a scenario in which Thorwald has murdered his wife and disposed of the body in gruesome fashion. Trouble is, Jeffries' musings just might happen to be the truth...