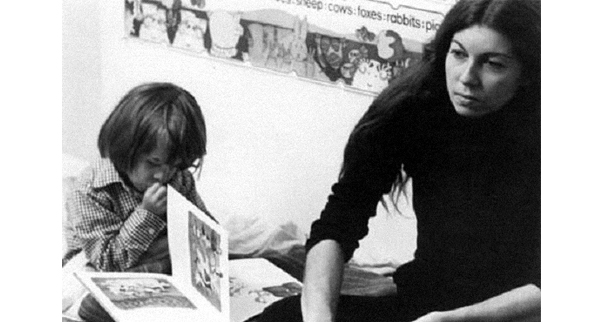 Free admission! This screening is part of the series "Unfinished Diaries: Exile on Film" - presented in conjunction with the exhibition "Exile: The Land of Non-Belonging"

In this moving docudrama, Chilean emigre Mallet struggles to make a film about her experience of profound isolation. Her English speaking husband, a prominent filmmaker, criticizes her subjective approach to filmmaking; their young son, raised in Quebec, speaks only French. Interviews with Isabel Allende and other Chilean exiles reveal a deep bond in this powerful, resonant film about language and gender, exile and immigration.

Born in Santiago, Chile in 1944, Marilú Mallet is a filmmaker and writer who came to Quebec as a political refugee after the coup d'état against President Salvador Allende in 1973. Mallet's recent projects include La Cueca Sola (2003), in which the filmmaker returns to Chile and tells the tragic yet uplifting stories of five women of different generations who suffered under Augusto Pinochet's dictatorship and emerged as heroes under democracy. Currently Mallet is working on a fictional film entitled Atacama. It is set in the Atacama Desert of Chile, a sparsely populated virtually rainless plateau, running from the Pacific Ocean to the Andes Mountains.

Unfinished Diary will be preceded by Message from Chile: Letters in Exile Cinema

Message from Chile: Letters in Exile Cinema (2018), a video-essay by José Miguel Palacios & Elizabeth Ramírez-Soto, reflects on the presence of letters in Chilean exile cinema, suggesting that the epistle emerges as a key trope representing the temporal and spatial rift imposed by displacement. Running time: 7:48 minutes.

José Miguel Palacios is a postdoctoral fellow in the Art Department at Universidad Alberto Hurtado in Santiago, Chile. His essays have appeared in Jump Cut, Archivos de la Filmoteca, la Fuga, Iberoamericana: América Latina-España-Portugal, and in the collections Cinematic Homecomings: Exile and Return in Transnational Cinema (2015) and New Documentaries in Latin America (2014). He received a Ph.D. in Cinema Studies from New York University in 2017.

Elizabeth Ramírez-Soto is an Assistant Professor in the School of Cinema at San Francisco State University. She is the coeditor of Nomadías: El cine de Marilú Mallet, Valeria Sarmiento y Angelina Vázquez (2016). Her essays have appeared in Quarterly Review of Film and Video, Journal of Latin American Cultural Studies, Rethinking History, and in the collection Doing Women’s Film History (2015). She received a Ph.D. in Film and Television Studies from the University of Warwick in 2014.

About Exile: The Land of Non-Belonging

How does it feel to be far from home when going back is out of question? Exile: The Land of Non-Belonging explores the experience of exile and the desire for identity and belonging at a moment when thousands of people are being torn away from their homelands. Coming from Afghanistan, Cuba, Iran, Palestine, and Vietnam, the five artists whose works are included in this exhibition all left their native countries because of forced expatriation or voluntary emigration. They use photography and photo-related practices to narrate their journeys through new environments where gender, ethnicity, and sexuality assume different connotations.

Exile is curated by Camilla Querin, Curatorial Fellow at the California Museum of Photography.