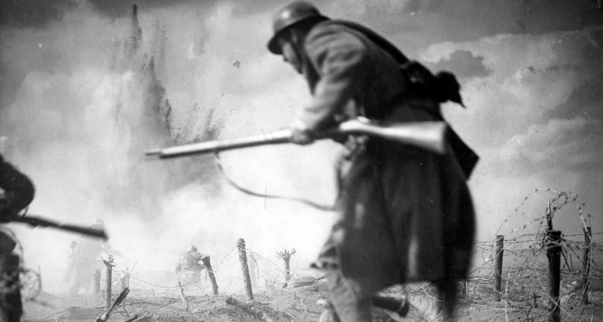 
G. W. Pabst brought the war movie into a new era with his first sound film, a mercilessly realistic depiction of the nightmare that scarred a generation, in Germany and beyond. Digging into the trenches with four infantrymen stationed in France in the final months of World War I, Pabst illustrates the harrowing ordeals of battle with unprecedented naturalism, as the men are worn away in body and spirit by firefights, shelling, and the disillusion that greets them on the home front.

"Pabst makes palpable the anxiety and suffering of trench warfare in Westfront 1918, as explosions rain down on the battlefield, leaving the mangled bodies of young men in their wake. Contemporary audiences, no longer able to deny the tragic horrors of the Great War, were also forced to confront the very real potential for history to repeat itself. Pabst’s depictions of antiheroic sacrifice and senseless death were indeed an affront to the Nazis, who banned the film upon seizing power in 1933." - The Museum of Modern Art

"The truth of the movie is all in the trenches." - Walter Goodman, The New York Times

"The always protean Pabst made a brilliant adjustment to sound." - J. Hoberman, The Village Voice