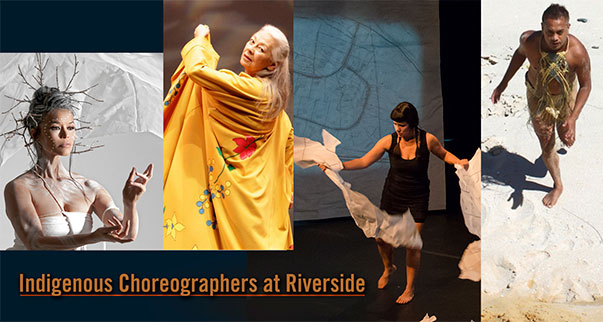 Recent work by five Indigenous choreographers from the U.S. and Aotearoa (New Zealand)


Free Admission, Open to the Public

Origi-Nation: Roots and Seeds
DANCING EARTH; Rulan Tangen, Artistic Director
Preview of solo from a new creative cycle that explores relationship to Native seeds, roots and plants. Dedicated to Grandma and Grandpa Diala in the green grass at the foot of the Golden Gate Bridge, and their roses that will never fade.

Elder Grandmother Speaks: Visioning in Life and Art
Daystar/Rosalie Jones
A traditional voice offers thoughts on the power of dreams while traveling from survivalism to the reality of being Indigenous.

We Wait In The Darkness
Rosy Simas Danse
We Wait In The Darkness is a journey of displacement and homecoming fueled by the stories of the Seneca women of Simas' family, particularly her grandmother. It is presented in an otherworldly environment of paper, film, maps, artifacts and sound. This work is created in collaboration with French composer François Richomme and production manager Steven Carlino.

Daystar/Rosalie Jones is the Founder and Artistic Director of Daystar Dance Company. The Company, founded in 1980, was the FIRST DANCE COMPANY in the U.S. created with all-native performers and specializing in the portrayal of the personal and tribal stories of Indian America. The Company has toured throughout the United States and Canada, and in Germany, Bulgaria, and Turkey. Daystar (Rosalie Jones) was born on the Blackfeet Reservation in Montana and is of Pembina Chippewa ancestry on her mother's side. She holds a Master's Degree in Dance from the University of Utah with postgraduate work at Juilliard School in New York City. She studied Korean, Hawaiian, East Indian and Flamenco dance, mine with Reid Gilbert, and modern with Jose Limon and Hanya Holm. Over many years, she has gained a knowledge of the indigenous dance and cultural forms of the Plains, the Northwest Coast, and Conchero Dance, among others. As a teacher, she was responsible for the revitalization of Performing Arts at the Institute of American Indian Arts in Santa Fe, New Mexico, during the early 1990's when she was Chair of the Department. In 1995, Daystar was awarded a two-year National Endowment for the Arts (NEA) Choreographer's Fellowship. In 2005, she began to help develop a Native performing arts curriculum at Trent University in Ontario. UC Riverside Special Collections holds the Daystar Archive, which she donated in 2004 as part of the Red Rhythms: Contemporary Methodologies in American Indian Dance conference. Her return marks the 10th anniversary of that donation.

Rosy Simas is a contemporary choreographer based in Minneapolis. She is Seneca from the Cattaraugus reservation in New York. Over the past 20 years, she has created more than 40 original works. Her work has been presented at virtually every dance-ready venue in the Twin Cities, including the Walker Art Center, the Cowles Center and the Southern Theater. Simas' work addresses how ancestry, homeland, culture, and history are stored in the body and can be expressed through dance. Simas is a 2013 recipient of the Native Arts and Culture Foundation Dance Fellowship, and recently received the NEFA National Dance Project production and tour award for her new work "We Wait The Darkness," which will tour North America 2014-2015. She comes to UCR this spring to present and workshop a version of this new choreography at the Culver Center on May 1, during ArtsWalk. This and other current work engages with contemporary Native experience, working with other Native dancers and artists, and reaching more Native audiences. Simas has also received grants and awards from the Tiwahe Foundation, the American Composers Forum Music For Dance Grant, McKnight Foundation/MRAC Next Step fund, Minnesota State Arts Board, Metropolitan Regional Arts Council, the Minnesota Women's Fund, and COMPAS. She has been awarded commissions from the Jerome/Intermedia Arts Performing Arts Series, the Walker Art Center/Southern Theater Momentum Series, the Playwrights Center, the Loft Literary Center, and the Oneida Arts Program. Simas trained at The Children's Theater Company, Zenon Dance, and at the University of Minnesota.

Rulan Tangen is an internationally accomplished dance artist and choreographer. She is the Founding Artistic Director and choreographer of DANCING EARTH Indigenous Contemporary Dance Creations, and has been noted as "One of the Top 25 To Watch" by Dance Magazine. Rooted in cultural respect, her vision for dance is at the avant garde experimental front of Native art expression in the USA, and is now being understood and recognized through awards, medals, academic invitations, and cultural honors. DANCING EARTH is a winner of the National Dance Project Production and Touring Grant, and the National Museum of American Indian's Expressive Arts award. Tangen is a fellow of the Global Centre for Cultural Entrepreneurship, and has been awarded the first dance fellowship for Artistic Innovation by the Native Arts and Cultures Foundation. Here at UCR, she is a recipient of the Costo Medal for Education, Research and Service by UC Riverside's Costo Chair of Native Affairs. As performer and choreographer, Tangen has worked in ballet, modern dance, circus, TV, film, theater, opera and Native contemporary productions in the USA, Canada, France, Norway, Mexico, Brazil and Argentina. She has taught extensively in Indigenous communities across the Americas; at Washington University as Visiting Distinguished Scholar; at Stanford University's Institute for Diversity in the Arts, where she led a course on creative response to "RACE AND ENVIRONMENT;" and has presented lectures and workshops at Arizona State University, UC Riverside, and the University of New Mexico. Her choreography, created from Indigenous principles of collaboration rather than hierarchy, explores the de-colonization of theater premises and revitalizes Indigenous cultural practices. In building and touring her company, she recruits and cultivates a new generation of emerging Native multi-disciplinary artists. Her company DANCING EARTH premiered its first work in Riverside at the Sherman Indian High School, as part of the 2004 Red Rhythms: Contemporary Methodologies in American Indian Dance conference; she has returned regularly since to teach workshops at UCR and in the local Native community. She returns this year to donate her Archive to the UCR Special Collections library.

This event is part of Indigenous Choreographers at Riverside, hosted by Jacqueline Shea Murphy, UCR Department of Dance. The year-long celebration of UCR's Ph.D. in Critical Dance Studies will highlight a decade-plus of programming in Indigenous Contemporary Choreography at UCR, including the 10th year anniversary of the groundbreaking 2004 Red Rhythms: Contemporary Methodologies in American Indian Dance conference supported by a major grant from the Ford Foundation.

Indigenous Choreographers at Riverside is presented by the UCR Department of Dance with additional support from the UCR College of Humanities, Arts, and Social Sciences Dean's Office, the Culver Center of the Arts, the National Dance Project, the UC Riverside Costo Chair in American Indian Affairs and Native American Education Programs, the University of California Institute for Research in the Arts, UCR's departments of Ethnic Studies, Music, and Global Studies, and the Center for Ideas and Society.

CREDITS
We Wait In The Darkness is made possible by the New England Foundation for the Arts National Dance Project, with lead funding from the Doris Duke Charitable Foundation and additional funding from The Andrew W. Mellon Foundation, and is underwritten by the American Composers Forum's Live Music for Dance Minnesota program in partnership with NewMusicUSA, with funds provided by the McKnight Foundation and the Andrew W. Mellon Foundation. We Wait In The Darkness is also supported in part by First Peoples Fund (FPF) and the Ford Foundation through grant from the FPF Our Nations Spaces Program. Rosy Simas is a fiscal year 2014 recipient of an Artist Initiative grant from the Minnesota State Arts Board and a grant from the Metropolitan Regional Arts Council. This activity is made possible by the voters of Minnesota through a grant from the Minnesota State Arts Board, thanks to a legislative appropriation from the arts and cultural heritage fund; and by a grant from the National Endowment for the Arts.

Bianca Hyslop's presence here is supported by the Eileen May Norris Dance Scholarship, a New Zealand award for young artists, which she won in 2013 for Indigenous Contemporary Dance.