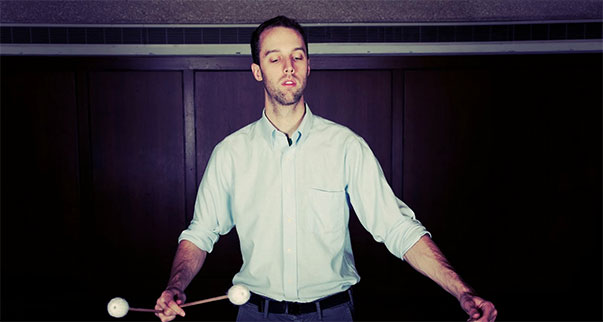 
Through a combination of original music, improvisation, and collaboration with leading composers of his generation, percussionist Owen Weaver's "intensely focused" (Gramophone) performances combine the forces of rhythm, noise, beauty and stasis while seeking the musical potential in everyday life. He uses recycled objects, homemade instruments and electronic sounds to construct a kaleidoscopic sound world ranging from the visceral to the sublime, clangorous to hypnotic.

Owen has been featured in the NYC-based Wordless Music Series, MATA Interval Series, Fast Forward Austin, two Nonclassical Records SXSW official showcases, and National Public Radio's All Songs Considered. A diverse collaborator, he has performed in Europe, South America and throughout the U.S. with Mantra Percussion, Glenn Branca Ensemble, NEWSPEAK, and others including performances with Conspirare: A Company of Voices for a PBS television special and Grammy-nominated album. A passionate educator, Owen has taught at Texas Lutheran University, the University of Texas at Austin, Yale University, the Hartt School and Rikers Island Correctional Facility.