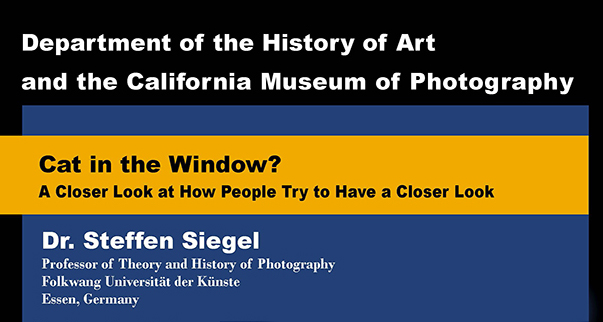 Cat in the Window? A Closer Look at How People Try to Have a Closer Look

According to Edgar Allan Poe, photography is best described as “infinite representation”. Especially during the medium’s first years comments often stressed photography’s unique capacity of capturing much more detail than possible in any painting, print or drawing. Magnifying glasses were common tools when it came to beholding — and praising — this novel kind of imagery. Today, we should know better. Every photograph is a sum of material, iconographic and social conditions–and of what we have learned about beholding photography. But still, there is an ongoing fascination with ideas like infinity, visual truth and perfection. In recent years, prominent photographs taken from the medium’s formative years–by Daguerre, Talbot, Bayard and other pioneers– have been put into reconsideration. Is it possible to see more than before? Especially with much more than an ordinary magnifying glass in our hands, is it possible to coax out more visual details, i.e. more information about times past? In my presentation I will introduce and reflect on the methods and results of such attempts. And I intend to pose a seemingly simple question: Is it possible to distinguish between beholding and imagination?”

Co-ogranized by UCR's Department of the History of Art and the California Museum of Photography at UCR ARTSblock. Additional support provided by UCR College of Humanities, Arts, and Social Sciences, and the City of Riverside.