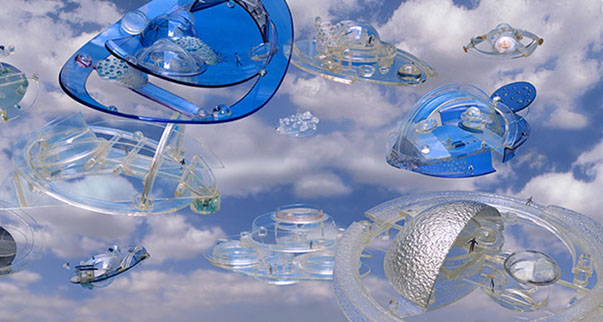 
Join us for a special tour of Mundos Alternos: Art and Science Fiction in the Americas led by co-curators, Tyler Stallings, Artistic Director of Culver Center of the Arts, and Robb Hernández, Assistant Professor Latina/o literary and cultural studies in the Department of English at the UC Riverside. Stallings and Hernández will lend an intimate look into the exhibition on Thursday, December 7, from 6-7 PM during First Thursday Artswalk. The event is free to the public. The museum will be open until 7 PM that evening.

Mundos Alternos: Art and Science Fiction in the Americas brings together contemporary artists from across the Americas who have tapped into science fiction’s capacity to imagine new realities, both utopian and dystopian. Science fiction offers a unique artistic landscape in which to explore the colonial enterprise that shaped the Americas and to present alternative perspectives speculating on the past and the future. In the works featured in the exhibition, most created in the last two decades, artists employ the imagery of science fiction to suggest diverse modes of existence and represent “alienating” ways of being in the world. Drawing on UCR’s strong faculty and collections in science fiction, the exhibition offers a groundbreaking account of the intersections among science fiction, techno-culture, and the visual arts. The exhibition is on view through February 4, 2018.

Tyler Stallings is Artistic Director of the Culver Center of the Arts. He was chief curator at Laguna Art Museum prior to his arrival at UCR in 2006. He received an MFA from California Institute of the Arts. Stallings’s curatorial projects focus on contemporary art, with a special emphasis on the exploration of identity, technology, photo-based work, and urban culture. His curated and co-curated exhibitions include Mundos Alternos: Art and Science Fiction in the Americas (2017), Free Enterprise: The Art of Citizen Space Exploration (2013), Lewis deSoto & Erin Neff: Tahquitz (2012), The Great Picture: The World’s Largest Photograph & the Legacy Project (2011), Margarita Cabrera: Pulso y Martillo (Pulse and Hammer) (2011), Mapping the Desert/Deserting the Map: An Interdisciplinary Response (2009), Intelligent Design: Interspecies Art (2009), Your Donations Do Our Work: Andrea Bowers and Suzanne Lacy (2009), Absurd Recreation: Contemporary Art from China (2008), Truthiness: Photography as Sculpture (2008), The Signs Pile Up: Paintings by Pedro Álvarez (2007), CLASS: C Presents Ruben Ochoa and Marco Rios: Rigor Motors (2004), Whiteness, A Wayward Construction (2003), Surf Culture: The History of Surfing (2001), Desmothernismo: Ruben Ortiz Torres (1998), and Kara Walker: African’t (1997). Stallings’s most recent book is Aridtopia: Essays on Art & Culture from Deserts in the Southwest United States (2014).

Robb Hernández is Assistant Professor of Latina/o literary and cultural studies in the Department of English at the University of California, Riverside. His current book project, Finding AIDS: Archival Body/Archival Space and the Chicano Avant-garde constructs a queer genealogy of Latino artist communities through the alternative archives, records, and custodial practices produced during the AIDS crisis. Hernández has published in such journals as Radical History Review, MELUS: The Society for the Study of the Multi-Ethnic Literature of the United States, and Azatlán: A Journal of Chicano Studies. He is a recipient of grants from the Getty, Ford, and Hellman Foundations; National Association of Chicana/o Studies; and Dartmouth College, among others. Hernández holds a PhD from the University of Maryland, College Park.

Mundos Alternos is curated by Robb Hernández, Assistant Professor of English at UCR; Tyler Stallings, Artistic Director of the Culver Center of the Arts; and Joanna Szupinska-Myers, Senior Curator of Exhibitions at the California Museum of Photography. Kathryn Poindexter, CMP Assistant Curator, is Project Manager.

Mundos Alternos is part of Pacific Standard Time: LA/LA, a far-reaching and ambitious exploration of Latin American and Latino art in dialogue with Los Angeles, taking place from September 2017 through January 2018 at more than 70 cultural institutions from Santa Barbara to San Diego, and from Los Angeles to Palm Springs.

Pacific Standard Time is an initiative of the Getty. The presenting sponsor is Bank of America. Major support for this exhibition is provided through grants from the Getty Foundation. Additional support is provided by UCR’s College of Humanities, Arts, and Social Sciences (CHASS), and the City of Riverside.