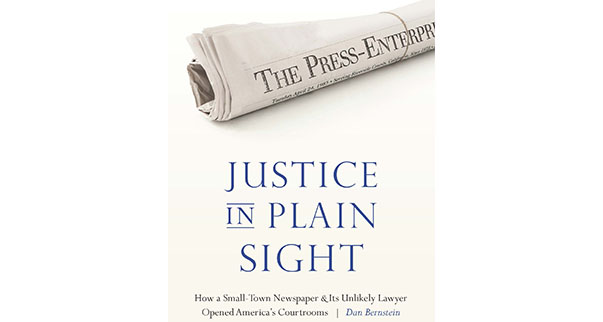 Inlandia Institute welcomes Dan Bernstein, longtime Press-Enterprise columnist and local legend, for his next local appearance celebrating the launch of Justice in Plain Sight: How a Small-Town Newspaper and Its Unlikely Lawyer Opened America’s Courtrooms. Joining Dan will be Mel Opotowsky, Press-Enterprise editor, and Jim Ward, the “unlikely lawyer” who took the fight to U.S. Supreme Court – and won.Learn how Riverside made history and broadened First Amendment rights for the betterment of the public good. This event is free and open to the public but RSVP is requested. Email Inlandia@InlandiaInstitute.org.Winning First Amendment rights for the public and the press.Justice in Plain Sight is the story of a hometown newspaper in Riverside, California, that set out to do its job: tell readers about shocking crimes in their own backyard. But when judges slammed the courtroom door on the public, including the press, it became impossible to tell the whole story. Pinning its hopes on business lawyer Jim Ward, whom Press-Enterprise editor Tim Hays had come to know and trust, the newspaper took two cases to the U.S. Supreme Court in the 1980s. Hays was convinced that the public—including the press—needed to have these rights and needed to bear witness to justice because healing in the aftermath of a horrible crime could not occur without community catharsis. The newspaper won both cases and established First Amendment rights that significantly broadened public access to the judicial system, including the right for the public to witness jury selection and preliminary hearings. Justice in Plain Sight is a unique story that, for the first time, details two improbable journeys to the Supreme Court in which the stakes were as high as they could possibly be (and still are): the public’s trust in its own government. “Dan Bernstein’s new book disproves two stereotypes about history: First, that it’s made only by the famous, and second, that it’s boring. This is a tale of small-town heroes, newspaper professionals, and lawyers. . . . In Dan’s capable hands, it’s smart, funny, and above all, enlightening.”—George Rodrigue, two-time winner of the Pulitzer Prize and editor of the Cleveland Plain Dealer “I simply loved Justice in Plain Sight. It is like a fairy tale with a landscape populated by now-extinct beasts. . . . For those who want to understand what journalism can mean to a community, here’s a well-told story of a very good newspaper.” —Donald E. Graham, former publisher of the Washington Post “As courts and the media today face political criticism and threats, Bernstein’s story of the paper’s landmark victories is a timely reminder of how crucial public access is to the integrity of our judicial system.”—Marcia Coyle, chief Washington correspondent of the National Law Journal and author of The Roberts Court: The Struggle for the ConstitutionDan Bernstein, born in Denver, was a reporter, editorial writer and columnist for the Press-Enterprise from 1976-2014. He began writing his column in 1982. Shortly after retiring in 2014, he began to research write what his wife, Candia, calls "the term paper from hell." (It's really just a book.) Mel Opotowsky was a lecturer in journalism at Cal Sate University, Fullerton for 15 years and in the Osher program at the University of California, Riverside extension program.  He has been a journalist for more than 60 years.  In 1999, he retired as managing editor at The Press-Enterprise. He also served as the paper’s ombudsman.James D Ward retired from the bench in 2005 after a twelve-year judicial career including ten years on the Court of Appeal.  He was named California Jurist of the Year by the Judicial Council in 2003.  For ten years he led the effort to create California’s new civil jury instructions.  Previously, his thirty-three years of practicing law was highlighted by winning two cases before the United States Supreme Court.