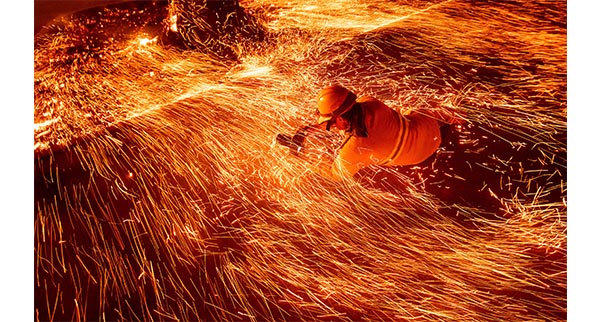 Join us for our Winter Opening Receptions on Saturday, February 29th from 6pm to 9pm!

We'll be celebrating the openings of Facing Fire: Art, Wildfire, and the End of Nature in the New West, Empty Vessel – Amir Zaki, Ray Barbee, and Scenes From The Collection: Trains.

Facing Fire: Art, Wildfire, and the End of Nature in the New West

Fire as omen and elemental force, as metaphor and searing personal experience -- these are the subjects explored by the artists of Facing Fire. California's diverse ecologies are fire-prone, fire-adapted, even fire-dependent. In the past two decades, however, West Coast wildfires have exploded in scale and severity. There is a powerful consensus that we have entered a new era. The artists of Facing Fire bring us incendiary work from active fire lines and psychic burn zones. They face fire, sift its aftermath, and struggle with the implications.

Culver Center of the Arts

Empty Vessel – Amir Zaki presents two new bodies of photographs by Amir Zaki featuring either vacant landscapes of California skateparks or still lifes of shards from broken, ceramic containers. The shards are clearly from earthenware pots, but both subjects are “vessels” in that the skateparks are sunken into the clay of the earth. Hung in proximity to one another, sometimes juxtaposed, the images generate a complex conversation around the notion of “emptiness,” which includes removing presuppositions from one’s mind about what one is about to experience, is experiencing, or has experienced.

Culver Center of the Arts

Rarely without his Leica M6, Ray Barbee brings the same unique perspective to the art of black and white film photography that he has brought to skateboarding over the past 30 years. Known for his freestyle skateboarding talents, Ray Barbee is a self-proclaimed "Jack of all Trades, Master of None." Barbee's exposure to the skateboarding world created his passion for photography and approach to capturing the world around him.

Scenes From The Collection: Trains

Scenes from the Collection is a new series highlighting thematic subjects found within the California Museum of Photography’s collections. The inaugural exhibition features photographs of trains. Spanning over 100 years of imagery, these photographs celebrate the power of trains and their infrastructure, showing both mundane and milestone scenes. Artists featured include Fred Archer, Walker Evans, William Henry Jackson, Paul Strand, Willard Worden, and Vida Yovanovich.

Thank you to our sponsors: UCR College of Humanities, Arts, and Social Sciences, and the City of Riverside. Special thank you to Altura Credit Union and Stella Artois.